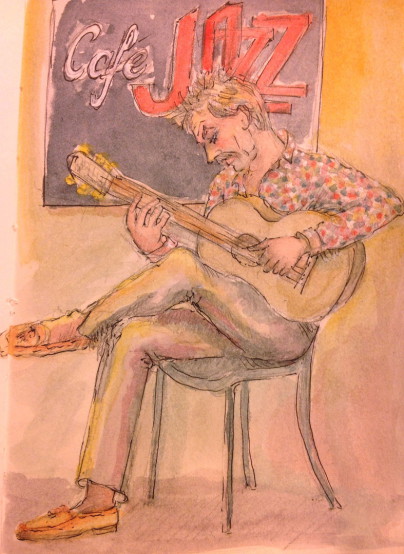 For as long as I can remember, I have been attracted to music.  I grew up listening to my mother playing Chopin and Mozart on our piano, and one of my elder sisters also took up piano at a young age.  Around this time, I used to love drawing and painting.  I would spend hours at a time at the dinner table hunched over a sketch pad whenever I wasn’t out getting up to mischief with my friends from up the road.  But that didn’t stop me listening to music on radio and TV.  This being in the 1960’s, pop music was very much dominated by the sound of the guitar.  But it wasn’t until I was a teenager that I seriously thought about learning to play an instrument, and I definitely fancied the guitar rather than the piano.

The strange thing was that, in spite of guitar music being dominated by Rock gods such as Jimi Hendrix,  Eric Clapton and so on,  I always seemed more keen on acoustic finger-style playing.  A chance encounter with Flamenco guitar music inspired me to make what, in hindsight, was an almost foolish decision to begin learning that from the very start.  I maybe should have chosen something easier.  But fortunately, I managed to make good progress early on and was soon totally taken over by this exciting new musical discovery. Within a year of starting, I had been able to spend time learning from a leading professional player in Madrid, Juan Gonzalez, known as 'Triguito'. Since those early days, guitar-playing has been the main focus of my life.  Needless to say, I’ve had to do various jobs during that time, and have had other skills, passions and interests to pursue.  But these have all been ephemeral in comparison.

I later ventured into playing electric guitar, using Blues as the obvious starting point.  These two very contrasting styles co-existed for years, without any problem apart from my fingertips taking a bit of a hammering at times.  My Blues roots took me into Soul, R&B, Rock, Country, Jazz, and just about anything in between at some time or other.  Flamenco, on the other hand, is such a special and unique style that I’ve never been tempted to adulterate it with any influences from outside of Spain.  I have, and always shall, regard it as a style that is expressed most profoundly in its pure and traditional form.

After decades of playing, learning and performing, I am pleased to be able to offer the benefit of my experience and knowledge to any guitarists, young or old, who feel they need a bit of help to improve.  I began teaching in 2001 after being hired by the Vale of Glamorgan Council to cover their Adult Education evening guitar classes. This led on to doing private one-to-one tuition.  It was shortly after this that I decided to concentrate once again on my Flamenco repertoire, and become a professional solo performer in 2008. Unlike many lucky professional players, I can't claim to have toured the world, or performed with famous artists, or in any world-class  venues. I don't have a glittering CV. But I do have confidence in my ability to entertain with a guitar.  And I'm more than happy with that.