Nothing evokes images and memories of Spain quite as vividly as the vibrant sound of Flamenco. This passionate folk music of the Andalusian gypsies has a history going back more than two centuries and is strongly influenced by the Arabic, Jewish and Moorish cultures that are so much a part of Spain’s colourful history.

It originated as a means of expression for the outcast gypsies and Andalusian peasants who, until relatively recently, lived primitive lives, isolated from the mainstream of Spanish society.  Historians have often compared its development to that of Blues and Jazz in America a century later.

The first component of Flamenco, the song, was soon followed by the dance.  As it developed and spread throughout Andalusia, the guitar began to be used as the main means of accompaniment. This is still true today.  Solo guitar-playing emerged during the latter part of the 1800’s, and has long been regarded as a major element of Flamenco, particularly outside Spain.

There are roughly thirty traditional song and dance forms that are commonly performed by artists today.  These have been handed down from generation to generation, and their styles usually vary from region to region.  Traditionally, Flamenco has never been written down or choreographed. Each performance, whether by singer, dancer or guitarist, is simply a personal interpretation of the particular form.

It was during the middle of the 20th century that Flamenco began to spread to countries outside Spain.  Many well-known artists, such as the great guitarist Sabicas, fled to South America in the 1930’s to escape the Spanish civil war.  By the 1960's, its fiery and exuberant nature had made Flamenco very popular in both the USA and throughout Europe.

This trend continued as more and more young Spanish stars looked overseas to find their fame and fortune.  The popularity of this vivacious and unique genre eventually spread to such far-away places as Japan and Australia, making it the most celebrated folk art in the world today. 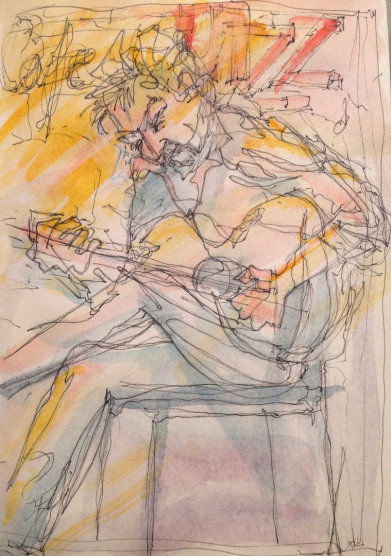 Jon is a leading performer of solo flamenco guitar throughout Wales and the South West.  Based near Cardiff, he has played venues including Celtic Manor Resort, the Senedd in Cardiff Bay, Atlantic College (St. Donat’s) and the Cafe Jazz in Cardiff city centre.   He has also played numerous private functions,  as well as many restaurants, pubs and residential care homes.

Jon takes particular pride in his professional attitude towards his clients, as well as the purity and authenticity of his playing style. He believes in remaining faithful to the flamenco traditions, with much of his own original material inspired by the great masters such as Sabicas, Niño Ricardo and Paco Peña.

As flamenco is unfamiliar to many listeners, Jon likes to engage and involve the audience by giving short introductions to the various pieces, describing their styles and origins. He uses a compact and high-quality PA system to provide just the right sound level for each individual venue. He can perform either as a featured solo artist, or simply play in the background to create a uniquely exotic Spanish atmosphere to enrich your own chosen event.

Jon is available for: